There seems to be some inconsistency, mainly in the Internet, in naming one of the main theorems proved by Gelfand and Naimark in their foundational 1943 paper: 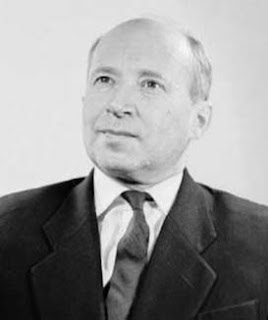 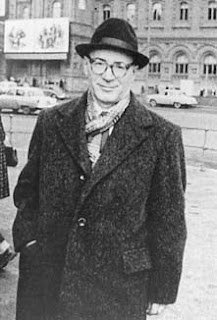 I have seen the result in question referred to as Gelfand-Naimark' or Gelfand's theorem. Also, talking to younger people I get a sense of confusion as to how it should be called. Before getting to the theorem in question, let me indicate why this paper is so important. This paper is fundamental for the following 4 reasons:

1) C*-algebras were abstractly defined in this paper for the first time ever (in their main axioms they had two extra conditions, which as authors themselves indicated, but were unable to prove, were redundant. It took some 17 years to reach to the current concise formulation of the main axiom, called the C*-identity-see below. This needs another post to explain and I hope we can get to that in another time. This book gives a detailed account of this circle of ideas). Together with Murray-von Neumann's series of papers on Rings of Operators, or what later came to be called von Neumann algebras (1936-1943), the Gelfand-Naimark paper formed the foundaton stone of operator algebras and, eventually, noncommutative geometry.

2) Commutative C*-algebras were fully characterized in this paper as algebras of continuous functions on compact spaces. This is the theorem that concerns us in this post and we shall get to that later.


3) General (i.e. not necessarily commutative) C*-algebras were shown to admit a faithful embedding in the algebra of bounded operators on a Hilbert space.

4) The notion of state on a C*-algebra was introduced (but not under its current name) and used in the proof of 3) . This was later streamlined by I. Segal in 1947 and today we talk of the GNS (Gelfand-Naimark-Segal) construction.


The proof of the CGNT is based on Gelfand's theory of commutative Banach algebras and in fact is one of its landmark applications. Another, earlier, major success of the theory was Gelfand's surprizingly short and elegant proof of Wiener's 1/f theorem: if a function f has an absolutely convergent Fourier series and is nowhere zero then its inverse 1/f has an absolutely convergent Fourier series as well.

A (complex, unital) Banach algebra is a complex algebra, equipped with a complete normed vector space structure. Futhermore, the norm and the multipcative structure are related by the identity

. A basic commutative example to keep in mind is the algebra C(X) of complex valued continuous functions on a compact Hausdorff space under pointwise addition and multiplication and the sup norm. But there are many other commutative examples of different natures. Important notions introduced in Gelfand's theory were that of the spectrum of an element and the fact that it is always non-empty; the spectrum of the algebra; and the Gelfand transform. The spectrum Spec (A) consists of multiplicative linear maps A....> C (charcaters or C-points of A). Being a subset of the dual space of A, it inherits a natural compact Hausdorff topology. Spec (A) can also be described as the set of maximal ideals of A: to a character associate its kernel...... The Gelfand transform is the more or less tautological map:

It is clearly an algebra map and is contractive (norm decreasing), but it need not be faithful. In the special case when A is the group algebra of an abelian group it reduces to Fourier transform. Finding the right class of commutative Banach algebras for which

is an isometric isomorphism is what is acheived by CGNT. A C*-algebra is an involutive Banach algebra which satisfies the C*-identity

It is hard to exagerate the importance of the C*-identity. It has many implications, e.g. the uniqueness of the C*- norm, continuity of involutive algebra maps,....... Typically, for an involutive Banach algebra we have just an inequality x*x\leq x^2. The C*-identity puts
C*-algebras in a very special place among all Banach algebras, rather similar to the privileged position of Hilbert spaces among all Banach spaces. The world of Banach spaces is wild, but the Hilbertian universe is tame!

A few comments are in order here:

i) These days everything must be `categorical' (I am afraid this is utterly out of date now and I should say `categorified'!-but let us be pedantic). In fact the CGNT goes a long way towards establishing an equivalence between the categories of commutative unital C*-algebras and compact Hausdorff spaces. Let us call these categories (with appropriate notion of morphism in each case) A and S. We have two functors
Spec: A^o .......>S and C: S ^o..............>A

(o means the dual or opposite category), assigning the spectrum and the algebra of complex valued continuous functions, respectively. These are equivalences of categories, (quasi) inverse of each other. In fact the composition C Spec: A .....> A is just the Gelfand transform and by the CGNT we know that it is isomorphic to the identity functor. This is the hard part. To show that the functor Spec C: S .......>S is isomorhic to the identity functor is much easier and is elementary. You just have to show that the Spec (C(X))=X for any X.

ii) The spectrum of a commutative C* -algebra may not be `visible' at first sight, unless the algebra is already in the form C (X). This often leads to interesting results. For eaxmple, the algebra C_b (R) of bounded continuous functions on the real line R is a unital commutative
C*-algebra in a natural way. So, by CGNT , we know that C_b (R) = C ( X), where X is a compact Hausdorff space. What is X and how is it related to R? It is easy to see that

is in fact the Stone-Cech compactification of R. More generally, for a locally compact Hausdorff space X the spectrum of C_b (X) can be shown to be homeomorphic to

, the Stone-Cech compactification of X. For an example of a different flavour, let X be a topological space which is manifestly non-Hausdorff and let A=C (X). Then the spectrum of A has the effect of turning X into a Hausdorff space and is in some sense the `Hausdorffization' of X. The reader should try to describe the spectrum of