While noncommutative geometry is entering into its fifth decade, we are sure some of this blog's readers were thinking would be appropriate to have a volume of articles by experts looking at its main developments in the past 40 years and looking ahead.The book, Advances in Noncommutative Geometry, dedicated to Alain Connes' 70th birthday, published by Springer late last year, certainly fills this gap! Please take a look by checking Springer's book website linked above. See also further down the page for a brief introduction.  (Posted by Caterina Consani and Masoud Khalkhali). 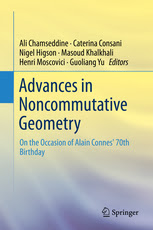 From the foreword to the book:

"Deeply rooted in the modern theory of operator algebras and inspired by two of the most influential mathematical discoveries of the 20th century, the foundations of quantum mechanics and the index theory, Connes' vision of noncommutative geometry echoes the astonishing anticipation of Riemann that ''it is quite conceivable that the metric relations of space in the infinitely small do not conform to the hypotheses of geometry'' and accordingly ''we must seek
the foundation of its metric relations outside it, in binding forces which act upon it. The radically new paradigm of space proposed by Connes in order to achieve such a desideratum is that of a spectral triple, encoding the (generally non-commuting) spatial coordinates in an algebra of operators in Hilbert space, and its metric structure in an analogue of the Fermion propagator viewed as ``line-element.''

For the analytic treatment of such spaces, Connes devised the quantized calculus, whose infinitesimals are the compact operators, and where the role of the integral is assumed by the Dixmier trace. On the differential-topological side, Connes has invented a far-reaching generalization of de Rham's theory, cyclic cohomology which, in conjunction with KK-theory, provides the key tool for a vast extension of index theory to the realm of noncommutative spaces. Besides the wealth of examples of noncommutative spaces coming from physics (including space-time itself with its fine structure), from discrete groups, Lie groups (and smooth groupoids), with their rich K-theory, a whole class of new spaces can be handled by the methods of noncommutative geometry and in turn lead to the continual enrichment of its toolkit. They arise from a general principle, which first emerged in the case of foliations. It states that difficult quotients such as spaces of leaves are best understood using, instead of the usual commutative function algebra, the noncommutative convolution algebra of the associated equivalence relation.
An important such new space is the space of adele classes of a global field that Connes has introduced to give a geometric interpretation of the Riemann--Weil explicit formulas as a trace formula. The set of points of the simplest Grothendieck toposes are typically noncommutative spaces in the above sense and the adele class space itself, for the field of rationals, turns out to be the set of points of the scaling site, a Grothendieck topos which provides the missing algebro-geometric structure as a structure sheaf of tropical nature.

The pertinence and potency of the new concepts and methods are concretely illustrated in the contributions which make up this volume. They cover a broad spectrum of topics and applications, shedding light on the fruitful interactions between noncommutative geometry and a multitude of areas of contemporary research, such as operator algebras, K-theory, cyclic homology, index theory, spectral theory, geometry of groupoids and in particular of foliations. Some of these contributions stand out as groundbreaking forays into more seemingly remote areas, namely high energy physics, algebraic geometry, and number theory."

Posted by Masoud Khalkhali at 12:40 AM No comments: