THE MUSIC OF SPHERES

The title of this post, the music of spheres, refers to a talk The music of shapes which I gave in Lille, on the 26th of September, on the occasion of a joint meeting with the Fields Institute. The talk is an introduction to the spectral aspect of noncommutative geometry and its implications in physics.
The starting point is the naive question "Where are we?", or how is it possible to communicate to aliens our position in the Universe. This question leads, in the Riemannian framework of geometry, to that of determining a complete set of geometric invariants, both for a space and for a point in a space. The theme of Mark Kac, "Can one hear the shape of a drum" associates to a shape its musical scale which is the spectrum of the square root of the Laplacian, or better of the Dirac operator. After illustrating this familiar theme by many concrete examples we give a hint of the additional invariant which allows one to recover the geometric picture, namely the CKM invariant, and illustrate it, in a simplified form, in the simplest possible example of isospectral but non congruent shapes.
What about the relation with music? One finds quickly that music is best based on the scale (spectrum) which consists of all positive integer powers $q^n$ for the real number $q=2^{\frac{1}{12}}\sim 3^{\frac{1}{19}}$. Due to the exponential growth of this spectrum, it cannot correspond to a familiar shape but to an object of dimension less than any strictly positive number. As explained in the talk, there is a beautiful space which has the correct spectrum: the quantum sphere of Poddles, Dabrowski, Sitarz, Brain, Landi et all. Its spectrum consists of a slight variant of the $q^j$ where each appears with multiplicity $O(j)$. (See the original  paper of  Dabrowski and Sitarz arXiv:math/0209048 (Banach Center Publications, 61, 49-58, 2003) for the precise formula, and the paper of Brain and Landi arXiv:math/1003.2150 for a variant and the many references to the mathematicians involved, my apologies to each of them for not puting the list here.)
We experiment in the talk with this spectrum and show how well suited it is for playing music.
The new geometry  which encodes such new spaces, is then introduced in its spectral form, it is noncommutative geometry, which is then confronted with physics.  There the core is  the spectral Standard Model of A. Chamseddine and the author which goes back to 1996. We tell the tale of the resilience of this model in its successive confrontations with experiments.
Both the start and the end part of the talk are unusual. The previous talk was a talk by Alain Aspect on his recent experiments, with his collaborators, confirming experimentally the "delayed choice" Gedankenexperiment of John Wheeler. So the very beginning of my talk refers to Aspect's point about the subtelty of  the concept of  "reality" implied by the quantum. The thesis which I defend briefly is that the total lack of control that we have on the outcome of a quantum experiment (we control only the probabilities), is a "variability" which is more primordial than the classical variability governed by the passing of time (on which we have no control either). I also explain briefly why time will emerge from the quantum variability.
The end part, in the question session, is also unusual, it is a long answer to a question which was posed by Alain Aspect. 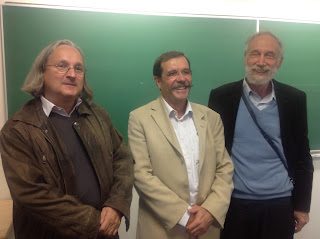 Update : The talk of Alain Aspect is now also available at the  conference website

It was always my fondest hope that the arithmetic of function fields in finite characteristic would finally become sophisticated enough so that it could be developed somewhat in tandem with classical arithmetic. In the recent past, this hope appears to becoming real. In particular, I would like to draw your attention to the new preprint by Federico Pellarin arXiv:1210.2490 "On the generalized Carlitz-module" where the formalism due to Carlitz is applied to deduce new functional equations for Euler's $\Gamma$-function (as well as applications to other classical special functions).

Let ${\mathbf F}_q$ be the finite field with $q$ elements and let $\theta$ an indeterminate; as usual we put $A:={\mathbf F}_q[\theta]$. When Carlitz was originally developing his module in the 1930's he chose the mapping generated by $\theta \mapsto \theta -\tau$ where $\tau$ is the $q$-th power mapping. I changed this to $\theta + \tau$ simply because this made computing Frobenius elements a bit easier.

As the theory of the Carlitz module, and general Drinfeld modules, began to develop, it was realized that one could abstract from the original settings of function fields over finite fields and this was developed e.g., by Mumford (1977) and Hellgouarch (1992 and 1997). In the paper by Federico this formalism is applied to complex analytic functions in a very concrete fashion.

More specifically, Let $F$ be the field of (complex valued) meromorphic functions in $s$ which are periodic of period $1$. Obviously, the function $s$ is not in $F$ and so one forms the polynomial ring (of functions) ${\mathbf A}:=F[s]$; notice that the huge field $F$ is now playing the role of the finite field $\mathbf F_q$....

The question is what plays the role of the $q$-th power mapping; here Federico makes the crucial choice $\tau (f):=f(s+1)$ where $f$ is a meromorphic function (so that obviously $F$ is the fixed field of this action). One then has the (generalized) Carlitz module associated to $(F[s], \tau)$ simply by following Carlitz's idea of composing actions and his original formalism mentioned above! In particular, one is now able to talk about the torsion elements associated to an element $a\in F[s]$.

Posted by Unknown at 8:30 PM No comments: