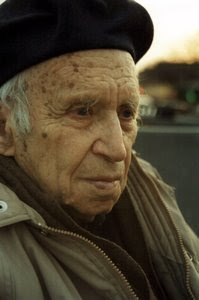 The noncommutative geometry blog is deeply saddened to inform its readers of the passing of Israil Moiseevic Gelfand, one of the most influential mathematicians of the 20th century, on October 5 at the age of 96. Gelfand's monumental contributions to mathematics and science covered many areas including commutative normed rings and functional analysis, representation theory of Lie groups and Lie algebras, generalized functions, mathematical physics, partial differential equations, and theoretical biology. His celebrated structure theorems for commutative and noncommutative C*-algebras are among the pillars of operator algebras and NCG. We hope to cover Gelfand' s work and impact more extensively but meanwhile you can check the AMS web site for more on Gelfand's work.
And here is a NYT obituary, and an Interview from six years ago.
Posted by Masoud Khalkhali at 4:25 AM 2 comments: