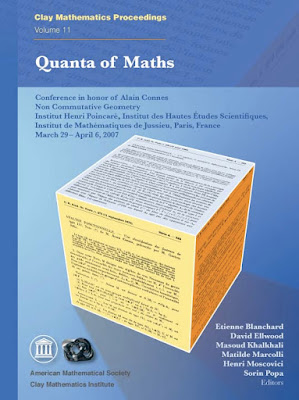 First of all, happy new year to all our readers and user of this blog! Wish you all a great new
year 2011! Secondly I would like to share with you a piece of information on new books in our beloved subject Noncommutative Geometry. The Quanta of Maths, proceedings of a 2007 Paris conference in honor of Alain will be available shortly (if not yet). Here are several links where you can order a copy/or get more information:
AMS Clay Amazon

Finally here is an appeal to noncommutative geometry community. We are planing to add a new section to this blog. If you have a regular (or almost regular!) NCG and related topics seminar please let us know so that we can create a link to it in this blog. This should help people to follow events in the field more effectively.
Posted by Masoud Khalkhali at 7:46 PM No comments: 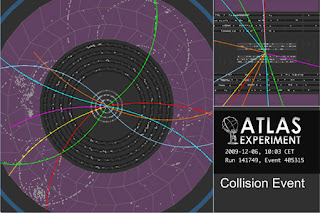 LHC beams produced the first collisions at 7 TeV yesterday. The event, transmitted live on the CERN webcast is now reported at http://public.web.cern.ch/public/
It is good reason for celebration for all those who have been, in one way or another, involved in the study of models for elementary particle physics. It will still take time before some new physics will be detected. The best possible scenario one might envision is that what will be seen does not correspond to any of the currently available theoretical models, as that would definitely usher a major revolution in our way of thinking of high-energy physics. A more moderate expectation is that some of the currently predicted scenarios will be verified: for example, some of the supersymmetric partners of Standard Model particles may be detected.
At least we all expect the Higgs particle to be seen: at what energy it will show up will have theoretical consequences, possibly excluding some of the theoretical scenarios currently considered.
In view of the specific Noncommutative Geometry theme of this blog, one can take this occasion to point out the recent very interesting paper of Thijs van der Broek and Walter van Suijlekom, "Supersymmetric QCD and noncommutative geometry", which extends the particle physics models based on NCG to include the QCD sector of the MSSM, available at http://arxiv.org/abs/1003.3788
There has been also a certain amount of recent activity around the theme of cosmological applications of NCG models of particle physics, with a conference that took place in mid December at the IHES. Models of the very early universe can be obtained by considering the spectral action at unification as a boundary condition and allow the gravitational terms to evolve according to the RGE flow of the corresponding particle physics model through their coupling at unification with the Yukawa parameters via the coordinates of the moduli space of Dirac operators on the fiber noncommutative space. This only provides cosmological models for the epoch between the unification and the electroweak scale, where, however, one can see some inflation scenarios that are specific to this model, see http://arxiv.org/abs/0908.3683.
In terms of testable cosmological prediction, this allows for a modified evaporation law of primordial black holes. A better way to obtain cosmological models from NCG that are not
limited to the very early universe, and can therefore be compared more directly with available cosmological data is in preparation (soon to be released)... 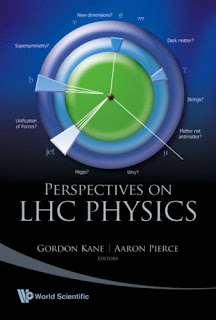 Addendum: after this momentary noncommutative indulgence, let me return briefly to more concrete LHC stuff. A very good recent account of LHC physics is given in the collection of essays published in the volume "Perspectives on LHC physics", edited by Gordon Kane and Aaron Pierce (World Scientific, 2008). It makes a very good reading for anyone interested in getting a short but very informative overview of the main directions in which LHC research is going to develop in the coming months. Just to mention briefly some of the contributions in the volume: a good account of the layout and structure of the Atlas and CMS detectors is given in the paper written by my colleague Maria Spiropulu and by Steinar Stapnes. An interesting discussion of dark matter candidates and their possible occurrence in LHC events is given by Pierce and also touched upon in a few other chapters. The section contributed by Giudice on naturalness is very well presented, I quite enjoyed it. Another nice contribution, again by Maria Spiropulu, this time with Lykken, discusses the problem of "look-alikes" namely different competing models that predict the same inclusive missing energy excess for a given integrated luminosity, in the same detector. One of the main tasks of LHC physics is the disambiguation of these look-alikes, after the models that are ruled out by the expriment have been eliminated. The description of the general approach and strategy for dealing with the look-alike problem is a particularly interesting part of the book. I am not going to spoil the reader's fun by giving away too much of the plot, I simply recommend it as a very good side reading to accompany the parties and celebrations that took place in the last couple of days around the LHC first collisions.
Posted by Matilde at 5:04 PM No comments: