Review of "Arithmetic of characteristic p special L-values" by B. Anglès and L. Taelman

Bruno Anglès and Lenny Taelman have published a profound study of finite characteristic special values as listed in the title. This appeared in Proc. London Math. Soc. (3) 110 (2015) 1000-1032. The analogy with classical theory is clear throughout the paper, as well as some potentially interesting differences; these results bode very well for the future of the subject. I have written a long review of this paper as well as pointing to a very new one on the web. This is been submitted to Math Reviews/MathSciNet and appears here with their explicit permission.

(Added 12-11-2015: A revised version of the paper by Anglès and Tavares Rebeiro cited in the review (along with a third author Tuan Ngo Dac) has been put on the arXiv as arXiv:1511.06209v2. In this new version the result is established in complete generality for all q.)

A url for a pdf of this review is 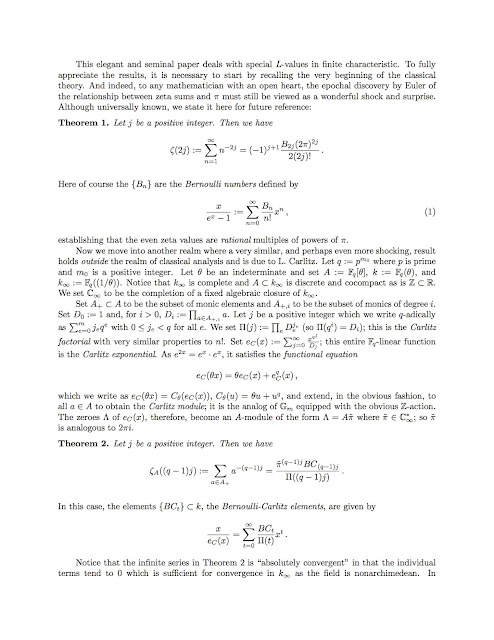 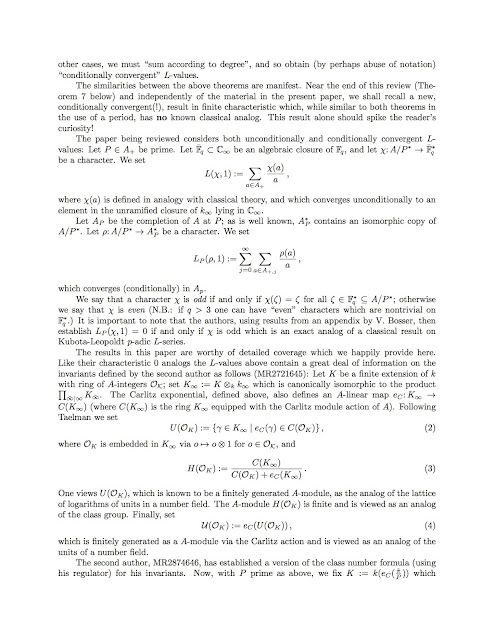 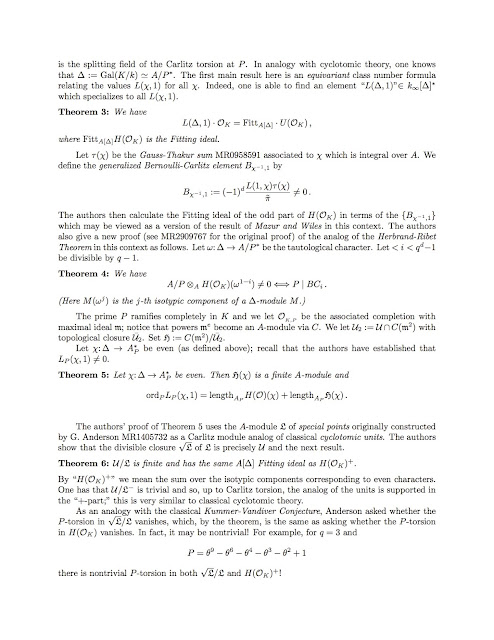 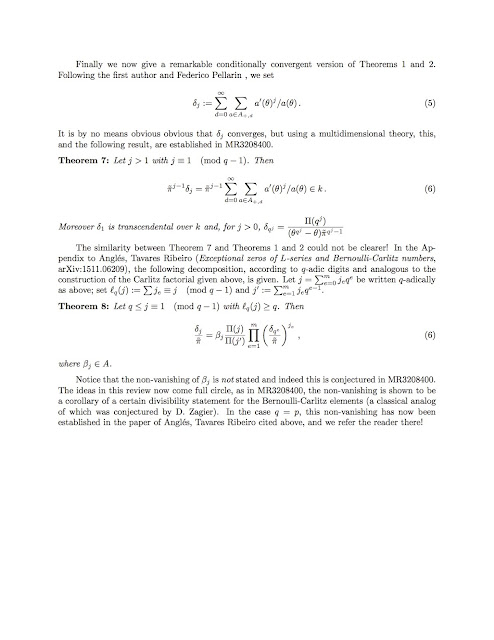 Posted by Unknown at 8:51 PM No comments:

C. Armana's Formula for the coefficients of $h$ 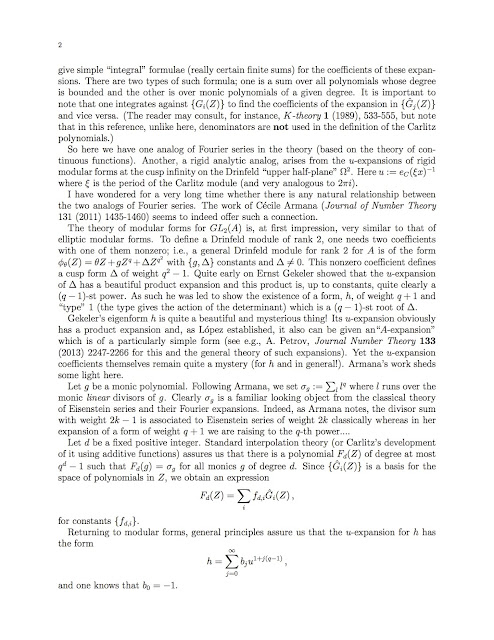 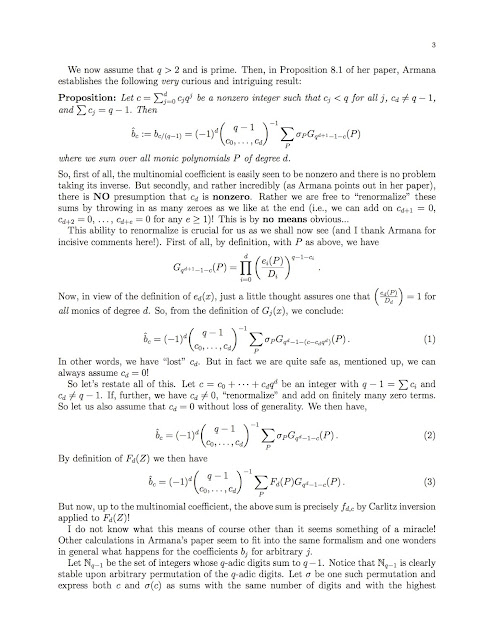 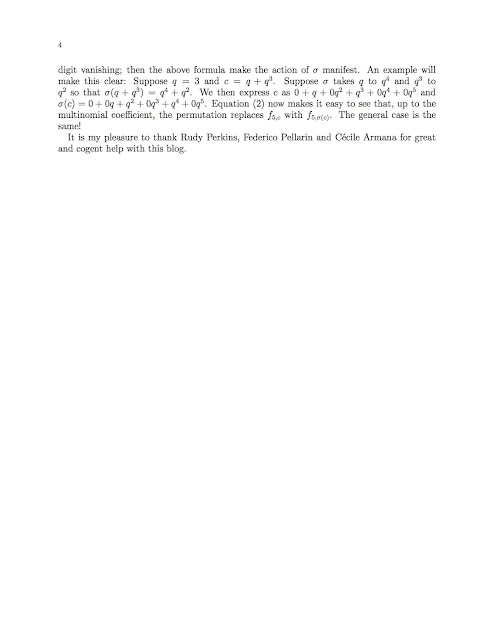 Posted by Unknown at 7:42 PM No comments:

Uffe Haagerup was a wonderful man, with a perfect kindness and openness of mind, and a mathematician of incredible power and insight.
His whole career is a succession of amazing achievements and of decisive and extremely influential contributions to the field of operator algebras, C*-algebras and von Neumann algebras.
His first work (1973-80) concerned the theory of weights and more generally the modular theory of Tomita-Takesaki. Uffe  Haagerup began by solving a key open question, showing that semi-finite weights are indeed supremum of families of normal states. This allowed him to develop the standard form of von Neumann algebras, a basic result used over and over since then.  I remember vividly his first appearance in the field of operator algebras and the striking elegance, clarity and strength of his contributions.
He was the first to introduce the Lp-spaces associated to a type III von Neumann algebra. These new spaces have since then received a lot of attention both from operator algebraists and specialists of Banach spaces and operator spaces.
In a remarkable paper published in Inventiones at the end of the seventies, Haagerup was able to analyse the operator norm in the C*-algebra of the free group, to control it by suitable Sobolev norms in spite of the exponential growth of the group and to prove in particular that in spite of its lack of nuclearity the reduced C*-algebra has the Banach space approximation property. This turned out in the long run to be a breakthrough of major importance. It was extended by Haagerup and his collaborators to any discrete subgroup of a simple real rank one Lie-group. One corollary is the property RD of rapid decay which allows one to define the analogue of the Harish-Chandra algebra of smooth elements in the general context of Gromov hyperbolic groups.  This highly non-trivial result of Haagerup turned out to be the technical key in the proof of the Novikov conjecture for such groups. Moreover the study of discrete groups with the Haagerup property continues to play a major role in geometric group theory.  The associated approximation property for the corresponding factors of type II_1 (called the Haagerup property) also played a major role in the solution by Popa of the long-standing problem of factors N non-isomorphic to M_2(N), and of exhibiting a factor with trivial fundamental group.
The next fundamental contribution of Haagerup is to the classification of injective factors (1983-87). In my work on the subject I had left one case completely open (in 76) and the classification was thus incomplete. After several years of extremely hard work Haagerup was able to settle this question by proving that there is up to isomorphism only one hyperfinite factor of type III_1. This is a wonderful achievement.
Then Haagerup turned to the theory of subfactors, and, once again, was able to make fundamental contributions such as his construction of new irreducible subfactors of small index > 4, and outclass the best specialists of the subject created by Vaughan Jones at the beginning of the eighties.
Another key contribution of Haagerup is to Voiculescu's Free Probability and to random matrices which he was able to apply very successfully to the theory of C*-algebras and of factors of type II1. For instance he proved that, in all II1 factors fulfilling the approximate embedding property (which is true in all known cases) every operator T with a non-trivial Brown measure has a non-trivial closed invariant subspace affiliated with the von Neumann algebra generated by T.
Uffe continued at the same relentless pace to produce amazing contributions and the few mentioned above only give a glimpse of his most impressive collection of breakthrough achievements.

Uffe Haagerup was a marvelous mathematician, well-known to operator algebraists, and to the general community of analysts.  From my own perspective an analyst is characterized by the ability of having ”direct access to the infinite” and Uffe Haagerup possessed that quality to perfection. His disparition is a great loss for all of us.
Posted by AC at 10:26 PM 1 comment: