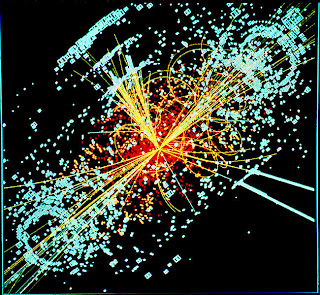 CERN has announced a Scientific  Conference  on July 4th  to be followed by a press conference  immediately after. Rumour  and news been spreading in the  blogsphere,  including here,  that hints to a dramatic, and long awaited, announcement of Higgs'  discovery during this event! Did they eventually get it? Well,  we shall see!
Posted by Masoud Khalkhali at 12:37 PM No comments:

The Riemann Hypothesis as a statement about ramification

When I was learning algebraic number theory long ago, it was remarked that one did not know how far the analogy between Archimedean local fields and nonArchimedean ones could be pushed. In particular, one did not know whether one should view the extension ${\mathbf C}/{\mathbf R}$ as being ramified or not. For example, the value groups (of the usual absolute value) of both $\mathbf R$ and $\mathbf C$ are the same, which  is the hallmark of a unramified extension of nonArchimedean local fields....

So far this is simply definitional.  However, viewing the zeroes as being unramified has very serious explanatory power in finite characteristic. Indeed, in the mid 1990's Daqing Wan, B.\ Poonen, D.\ Thakur and Jeff Sheats, showed that the zeroes of the characteristic $p$ zeta function lie in $K$ (and are also simple!). However, it was very confusing to come up with a statement that would be something like a Generalized Riemann Hypothesis. Indeed, the fact that we are using nonArchimedean analysis forces the existence in general of  zeroes not lying in $K$. But, using the above restatement of the classical RH, I recently realized that the best one could hope for in terms of generalizing Wan/Poonen/Thakur/Sheats is that the zeroes are always unramified and that this fits with classical theory too!

It is with profound sadness that we learn about the sudden death of Jean Louis Loday
who fell by accident off his sailing boat on June 6th. We loose an outstanding mathematician
with so many great achievements and a wonderful friend of many years.