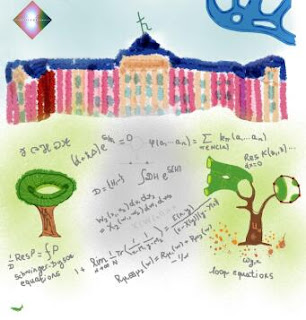 We plan to run the workshop in hybrid form with a considerable number of participants present in Münster and video transmission to the outside world.

This workshop intends to be a first meeting point for specialists and young researchers active in noncommutative geometry, free probability, and topological recursion. In the two first areas, one often wants to compute expectation values of a large class of noncommutative observables in random ensembles of (several) matrices of size N, in the large N limit. The motivations come from the study of various models of 2d quantum gravity via random spectral triples, or from the problem of identifying interesting factors via approximations by matrix models. Topological recursion and its generalisations provide a priori universal recipes to make and to compactly organise such computations, not only for the leading order in N, but also to all orders of expansion in 1/N. In this way connections are established to domains like enumerative geometry, tropical geometry, mirror symmetry, topological and more generally low-dimensional quantum field theories where topological recursion has also been applied.

Concretely, the last 10 years have witnessed the developement

The workshop will explore the consequences of these remarkable algebraic structures axiomatised in topological recursion for problems in noncommutative geometry and free probability. Knowledge will also flow in the other direction, as the very nature of topological recursion hints at connections to (noncommutative) algebraic geometry and to Hopf algebraic structures and Connes-Kreimer renormalisation.

Mathematical models and phenomena under consideration are common to all these fields, and we wish to unite the strength of probabilistic/asymptotic, algebraic/geometric and combinatorial approaches for the benefit of all the communities involved. This interaction should in fine lead to a better geometric understanding, more powerful computational tools, and new results.

For Registration please check the

Posted by Masoud Khalkhali at 12:18 PM No comments:

An online summer school on K-Theory and Representation Theory, organized by N. Higson, R. Plymen and H. Sengun and sponsored by the London Mathematical Society and the Isaac Newton Institute, will take place 19-23 July 2021.

There will be four lecture series:

– Basics of group C*-algebras and K-theory, by Bram Mesland

The lectures will be aimed towards graduate students, but all are welcome to attend. Registration and further information are at https://sites.google.com/view/bath-21-dirac-induction/home

Posted by Walter van Suijlekom at 7:58 AM No comments:

SHELL BEACH - the search for the final theory, (guest post by Jesper Grimstrup)

My book SHELL BEACH - the search for the final theory is now out. In the book, which is written for a general audience, I discuss topics such as noncommutative geometry, loop quantum gravity and the question of a final theory - mixed with a dose of whitewater kayaking and massive (intellectual) waterfalls Starting in January 2021, the Fields Institute in Toronto is going to run various advanced graduate courses in collaboration with Ontario universities. Students from all over the world can either take these courses, or just audit them. For details  see  here

The Fields Academy has an undergraduate training component as well. For details  check
Posted by Masoud Khalkhali at 5:31 PM No comments:

In a recent series of papers [1-3], we have discovered a connection between non-perturbative quantum field theory and the (noncommutative) geometry of configuration spaces. In this blog-post, we would like to outline our findings in a non-technical manner intended for readers, who are familiar with the basics of noncommutative geometry and high-energy physics.

Chamseddine and Connes and co-workers have shown that the standard model of particle physics coupled to general relativity can be formulated in terms of an almost-commutative spectral triple [4-8]. Their seminal work, which renders key aspects of the standard model in a completely new light, raises two fundamental questions:

Embedded within this last question lies also the question of whether gravity should be quantized.

In our recent work, we propose a novel answer to these two questions. It turns out that a geometrical construction over a configuration space of gauge connections gives rise to a non-perturbative quantum field theory on a curved background — including both bosonic and fermionic degrees of freedom — which produces an almost-commutative algebra similar to that of Chamseddine and Connes. Thus, what we propose is that the standard model of particle physics originates from a geometrical framework intimately related to non-perturbative quantum field theory.

For another possible answer to the first question see also the work of Connes, Mukhanov, and Chamseddine [9,10].

The geometry of moving stuff around

The starting point of our construction is an algebra called the HD algebra [11,12], which is generated by parallel transports along flows of vector fields in a three-dimensional manifold. That is, the HD algebra encodes how tensor-degrees of freedom are moved around in space. The HD algebra, which comes with a high degree of canonicity, is a non-commutative algebra of functions over a configuration space of gauge connections.

The next step is to formulate an infinite-dimensional Bott-Dirac operator on the configuration space of gauge connections. The construction of this operator, which resembles an infinite-dimensional Bott-Dirac operator that Kasparov and Higson constructed in 2001 [13], is severely restricted by the requirement of gauge-covariance.

A key feature of the Bott-Dirac operator is that its square produces the Hamilton operator of a Yang-Mills theory coupled to a fermionic sector as well as a topological Yang-Mills term together with higher-order terms — all on a curved background. Furthermore, the Bott-Dirac operator and its interaction with the HD algebra reproduce the canonical commutation relations of a quantized gauge and fermionic fields.

Thus, the formulation of a noncommutative geometry on a configuration space of gauge connections gives rise to the basic building blocks of a non-perturbative Yang-Mills-Dirac theory on a curved background.

All this shows that the fermionic degrees of freedom play an intrinsically geometrical role in this framework; they are intimately related to the geometry of the underlying configuration space.

A link to the standard model

which looks surprisingly similar to the matrix factor, which Chamseddine and Connes have found in the standard model [4,5]:

where H is the quaternions. Could there be a connection here? More analysis is required to determine whether this link can be substantiated, but for now, we are encouraged by our findings.

A key question is whether a Hilbert space representation of the HD algebra and the Bott-Dirac operator exists. We have shown that such a representation (strongly continuous, separable) exists in the special case where the gauge-symmetry is broken [3], but we do not have a proof in the gauge-covariant case. We are, however, confident that such representations do exist.

Note that the concept of a dynamical regularisation is almost inevitable in a non-perturbative gauge theory since any Hilbert space representation will likely require some kind of UV-regularisation. The requirement that this regularisation is gauge-covariant automatically makes it dynamical.

We believe that the idea of a dynamical UV-regularisation deserves much attention. After all, there exist very few concrete ideas as to how a Planck-scale screening may arise in Nature. This is one such idea.

In our recent work, we have shown that essentially all the key building blocks of modern high-energy physics — bosonic and fermionic quantum gauge theory, gravity, an almost-commutative algebraic structure — emerges from a simple geometrical framework on a configuration space. This work raises many questions, some of the most important ones are:

With this, we end this blog-post;

Posted by Masoud Khalkhali at 11:55 PM No comments:

With YouTube and Zoom playing a much bigger role now in disseminating knowledge across the globe, it is only natural to have a YouTube channel dedicated to posting talks in an ongoing global noncommutative geometry seminar. The seminar is a collective effort with three nodes in Europe, Americas and Asia. There are many details that still has to be worked out and currently many people are working on that. Meanwhile we are glad that at least the YouTube channel is up and running!  Here it is

Posted by Masoud Khalkhali at 7:15 PM No comments:

FAREWELL TO A GENIUS

We all learned with immense sorrow that Vaughan Jones died on Sunday September 6th.

I met him in the late seventies when he was officially a student of André Haefliger but contacted me as a thesis advisor which I became at a non-official level. I had done in my work on factors the classification of periodic automorphisms of the hyperfinite factor and Vaughan Jones undertook the task of classifying the subfactors of finite index of the hyperfinite factor among which the fixed points of the periodic automorphisms give interesting examples.By generalizing an iterative construction which I had introduced he was first able to show that the indices of subfactors form the union of a discrete set with a continuum exactly as in conformal field theory. But his genius discovery was when he understood the link between his theory of subfactors and knot theory which is the geometry of knots in three space!This is really a fantastic discovery that led to a new invariant of knots : the Jones polynomials!This discovery was afterwards dressed using functional integrals but the real breakthrough is indisputably due to Vaughan Jones. To me his discovery is one of the great jewels of the unity of mathematics where a seemingly remote problem such as the classification of subfactors of finite index turned out to be deeply related to a fundamental geometric problem! For this reason I do not hesitate to affirm that Vaughan Jones' discovery is one of pure genius and that his work has all characteristic features that grant it immortality.
Posted by AC at 6:59 PM No comments: